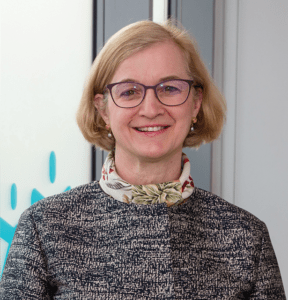 Amanda Spielman has been Ofsted Chief Inspector since January 2017.

Between 2011 and 2016, Amanda was chair of Ofqual, the qualifications regulator. From 2005 she was a founding member of the leadership team at the academy chain Ark Schools, where she became Research and Policy Director and an education adviser to Ark, the education charity. She previously spent more than 15 years in strategy consulting, finance and investment at KPMG, Kleinwort Benson, Mercer Management Consulting and Nomura International.

She is a council member at Brunel University London and has previously served on the boards of a number of organisations including the Institute of Education, STEMNET and Wales Millennium Centre, and has been a governor of two schools.

Her Majesty’s Chief Inspector
Her Majesty’s Chief Inspector (HMCI) is statutorily responsible for Ofsted’s inspection and regulatory work. She is able to draw on the full range of our inspection findings to report on the quality of education, children’s services and skills, locally and nationally. She is responsible to Parliament for the organisation, staffing and management of Ofsted, and for ensuring the efficient and effective use of our resources.