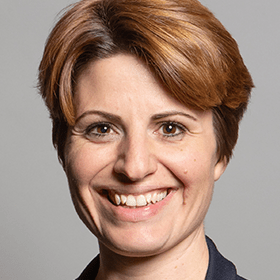 Emma Hardy was born and brought up in the East Riding – a few miles from the seat of Hessle and West Hull that she now represents in Parliament. She attended the local Wyke College in Bricknell for her sixth form studies before going further afield (Leeds and Liverpool) to train as a teacher. It wasn’t long before she was back home, however, teaching at Willerby Carr Lane Primary School – a school she taught at for over ten years.

It was teaching that led her into politics. Graduating in 2001 she starting teaching in 2004, but by 2011 she decided that she had better start fighting to defend the type of education that she valued. She wanted to defend an education system that gave all people of all ages the chance to make a better life for themselves just like the chance education had given her Dad. He’d left school with few qualifications but gone back to college later on in life to become a  head teacher. His route out of poverty – education  – was a route he shared with his brothers but in the austere climate post-2008, it was an education system that was being torn down by the then Education Secretary Michael Gove.

So, in 2011 Emma got political. She joined a campaign protesting against school cuts and met Alan Johnson, the then MP for Hessle and Hull West, to hand him a petition. In 2015 she left teaching to become a full-time organiser for the National Union of Teachers in order to put her all her efforts into fighting for the resources that schools and colleges needed.

In the 2017 snap election, she was nominated as the Labour candidate for Hessle and Hull West and took the seat with a majority of 8,025. Since her election, Emma has been able to actively pursue her passion for a stronger, better-funded education system in the House of Commons chamber and on the Education Select Committee. In addition to her funding campaigns, she has also challenged the Government to ban informal exclusions worked in support of the teaching of oracy (fluency in spoken communication) and promoted the benefits of a broad curriculum which includes the arts, music and sports.