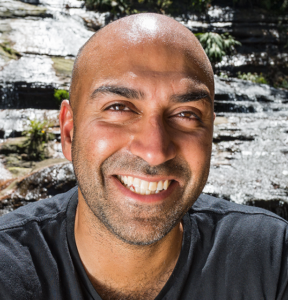 Amar Latif likes a challenge. A successful entrepreneur, he gave up his hard-won role as Head of Commercial Finance at BT to start his own travel company. He’s travelled the world, skydived, ski-ed, climbed, even done a spot of acting, and is also a TV presenter. A remarkable enough set of achievements, made more impressive because Amar has been blind since he was 18-years-old.

Born with an incurable eye condition, Amar had lost 95% of his sight by the time he was in his late teens. Determined not to be defined by his blindness, he continued through university and into a corporate career (despite the belief from some that you couldn’t be both blind and an accountant).

Amar also had an incurable lust for travel, but found travel companies seriously lacking when it came to accommodating the needs of independent blind and partially sighted explorers. So he started his own travel business with a mission to help blind people explore the world in a way that was usually closed to them.

Traveleyes brings together blind and sighted travellers, usually unknown to each other before the trip, and unites them through experiences from sailing to safaris to trekking up Europe’s highest peaks. Sighted travellers guide and share their descriptions with their blind companions. In response, the sighted experience first-hand a fearlessness and curiosity about the world that they’ve often lost.

As well as becoming an award-winning entrepreneur, Amar’s love of travel has been the foundation of a broadcasting career. For the BBC2 series Beyond Boundaries, Amar was part of a group of disabled travellers that explored South America, trekking from the Atlantic to the Pacific coasts, through jungle, over a volcano, and across one of the continent’s largest lakes. He’s appeared on

the award-winning River Walks for BBC1, and was the first ever blind contestant on Celebrity Masterchef. On BBC1’s Pilgrimage, he trekked a part of the Sultan’s Trail from central Europe to Turkey exploring both history, geography and faith. In BBC2’s Travelling Blind he joined comedian Sara Pascoe as they travelled from Istanbul’s Grand Bazaar to the Black Sea and the Cappadocia rock formations in an affecting and personal journey in which Amar explained the necessity of experience and the importance but impermanence of memory for blind people.

As both adventurer and entrepreneur, Amar considers how we view risk and trust – often overstating risk and giving into fear, and undervaluing trust. He recounts his entrepreneurial journey and how that too has influenced his view of risk, as he rejected the stability of a career to pursue something he understood, cared about, and which he was certain solved a problem for many like him.

As a Scot of Asian heritage, as well as being blind, Amar also examines the biases and assumptions that marginalise and exclude, and the damage done to individuals and society. He challenges how quick we are to define other with labels and expectations, and considers the inherent value, importance and advantages of diversity and inclusion.

Amar has spoken to audiences from the UN to Barclays, Samsung to the NHS to Goldman Sachs, sharing his personal story and the lessons in resilience, diversity and motivation. His enthusiastic and determined take on life is infectious and his story inspiring. He believes that obstacles are invariably a matter of other people’s perceptions and assumptions that we, convince ourselves are real. When you can’t see an obstacle, you don’t limit yourself before you’ve even tried. The obstacles you face can either define you, or you can prove how passion, persistence and spirit can overcome anything.